It’s a fact of life, people have things. Some people have very few things and choose to live their lives in such a style that is as minimalistic as possible. On the other side of the spectrum, there are people that have more stuff than they know what to do with. Those people need some kind of storage, and they likely want to be sure that those storage units are secure enough to keep potential thieves out. There are some challenges that come with designing tenant storage to be more secure, and that could be disheartening for people that are potentially looking into storage solutions for their multi-family properties.

Security is likely to be the biggest concern of yours as well as your tenants. After all, if someone is going to go through all of the trouble of putting their belongings into storage, those items are probably worth something either sentimentally or monetarily. Many people shudder at the thought of some stranger going through their things to find items that are worth selling off so they can make a quick buck. So, let’s take a look at some of the security challenges as well as a few solutions.

If There’s a Lock, It Can Be Picked

Locks have been around for a very long time. The first pin and tumbler lock, which is the same style that most locks today are, was created around 4,000 years ago. Ideally, these locks could only be opened by their corresponding key. Unfortunately, because of the way that locks work that’s not the case. Nearly any lock can simply be picked, most of them being able to be picked in a few seconds by an intermediate-level lock pick. Advanced-level lock picks can find a way to open up any lock.

This is because of how the pin and tumbler locks are designed, and unfortunately, the thing that makes them secure is the very same thing that makes them insecure. If you’ve ever seen a key, which you probably have, you’ve probably noticed that it has a collection of ridges. Those are there to correspond with the pins. When you put the key into the lock it pushes the pins in perfectly, allowing for you to turn the key and unlock the locking mechanism. Since we’re talking about tenant lockers, this locking mechanism is more than likely a shackle.

A lock pick will typically have tools on them that will allow for them to trigger the pins with a bit of patience. The bare minimum that these people will carry on them is a tension wrench and a feeler pick. The tension wrench is there to apply tension to the lock, recreating what the bulkier part of the key does. They’ll first insert the wrench, then they’ll insert their feeler pick to trigger the pins within. A good lock pick can get the pins down with the appropriate amount of force in a matter of seconds, while a less experienced lock pick might need a few minutes.

This is a challenge because of the way that locks work. If a lock is designed to be opened, it can be opened. Some locks are incredibly advanced and can’t be picked quite as easily. It’s not even unheard of for some locks to have trap pins that are only there to confuse any potential lock picks. That being said, even if the lock can’t be picked, most locks with unsecured shackles can still be opened by using bolt cutters and that usually doesn’t take more than a couple of seconds, depending on the strength of the thief.

You may hear this and think that everything is hopeless, but there’s actually a pretty solid solution here that’s pretty easy. Most security professionals agree that you don’t have to go overboard and that it’s actually better to use just as much security is needed. You really only need a lock that’s strong enough to keep most mid-level lock picks out. Most people aren’t highly-skilled lock picks, and if someone is really that good at picking locks there’s not much that will keep them out of anything that they want to get into.

You can decide if you want to use locks with shackle guards or not, but just think about how many of your tenants would notice a strange person walking around the complex with a pair of bolt cutters. It can be pretty hard to look inconspicuous when you’re walking around with a tool that’s only used to cut locks and chains. Really, the most elegant solution for this is to get yourself some nice security cameras. Like we said, a skilled enough lock pick can get into anything that they want with little resistance. The best way to deter them is to make sure that the most sensitive areas of your complex are under constant surveillance.

The Materials Use to Make the Lockers 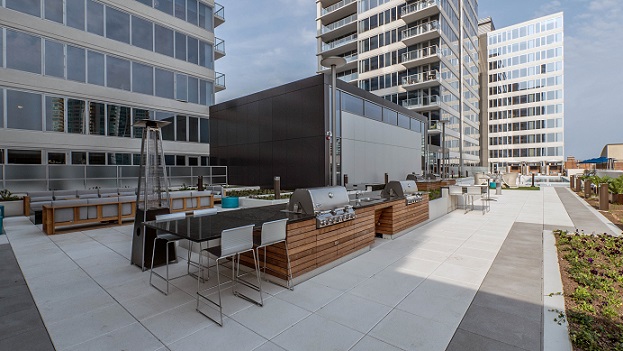 There’s another way that people could try to break into your lockers. It’s not pretty or elegant, but it can work given the strength and speed of the potential thief. This method is using brute force to break into the unit. Most on-site storage lockers are too tough to be busted down with someone’s bare hands, but there is something to be said about some humans having an abnormal amount of strength. Some people are truly capable of some incredible feats, and not all of those people use their strength for good.

This might seem daunting. Why wouldn’t the companies that make these lockers make sure that they can’t be broken down by anyone no matter their strength? Well, the first reason is cost. You won’t be able to find anything that’s that secure in a price range that you’d feel happy with, and that means that you wouldn’t be able to rent that out for a price that your tenants would be happy with if you even wanted to break even on the investment over time.

Some people that really want to keep their valuables safe use highly advanced safes to do so, but considering a good safe the size of a storage locker will cost you hundreds of thousands of dollars that isn’t really viable. With that in mind, someone using brute force to break into one of your units isn’t actually too big of a concern in the grand scheme of things for a number of reasons, and most thieves are aware of that. Smart thieves have to think about the risk vs the reward, while thieves that aren’t as smart are a lot more likely to get caught.

Put yourself into the shoes of a thief for a moment. You’re casing out an apartment complex because it has some storage lockers that might have a few valuables in them. Those valuables could potentially be a good haul, but what is the risk for getting these unknown belongings? In an ideal situation where they can move in darkness and simply pick the locks and be out quickly, the risk is significantly lowered because they can be fast, quiet, and functionally invisible. That’s where cameras and lights come in because a smart thief will realize that both of those combined lowers their chances of success by a lot.

Now, imagine you’re planning out this crime. You know how you want to approach it and that the risk is higher the more noticeable you are. That’s why car alarms exist. So, what’s the last thing you’d want to do? Use something like a power tool or your bare hands to break down the door to a storage unit. Brute force is incredibly loud, meaning that anyone nearby will be alerted to your presence pretty quickly. Many people even like to investigate these kinds of weird noises, and if someone catches you red-handed you’re done.

This is even riskier if the thief plans to use power tools. Not only do power tools create a large amount of noise that will alert everyone in the area, but often times trying to cut through metal creates sparks. Those sparks create flashes of light that will further warn your residents of something fishy going on, increasing the odds of the thief being caught. Your best bet to make sure that your lockers are safe is to just make sure that the storage area is well lit and that you have cameras set up around to keep an eye on things.

If you’ve invested into some storage for your tenants, there’s a good chance that you want them to be as secure as possible. After all, if your tenants perceive your storage lockers to be insecure there’s a good chance that they’ll simply use an off-site storage provider that can keep their things safer. Fortunately, there are a few simple things that you can do to optimize the safety of the storage in your apartment complex while simultaneously maximizing the number of tenants that take advantage of the availability of such units.

What Is Cold Rolled Steel Used For?

Root Stimulator: What Does it Do for Plants?

Do You Need A Relocation Software?

With These 5 Pointers, You Can Master The Art Of Relocation Software

The Ultimate Guide to Renting a Self-Storage Unit

El Ezz Developments: 30 Years of Success & Innovation in The Real…